What is NAIDOC week?

Posted on 7 July 2019by Coral Rowtson 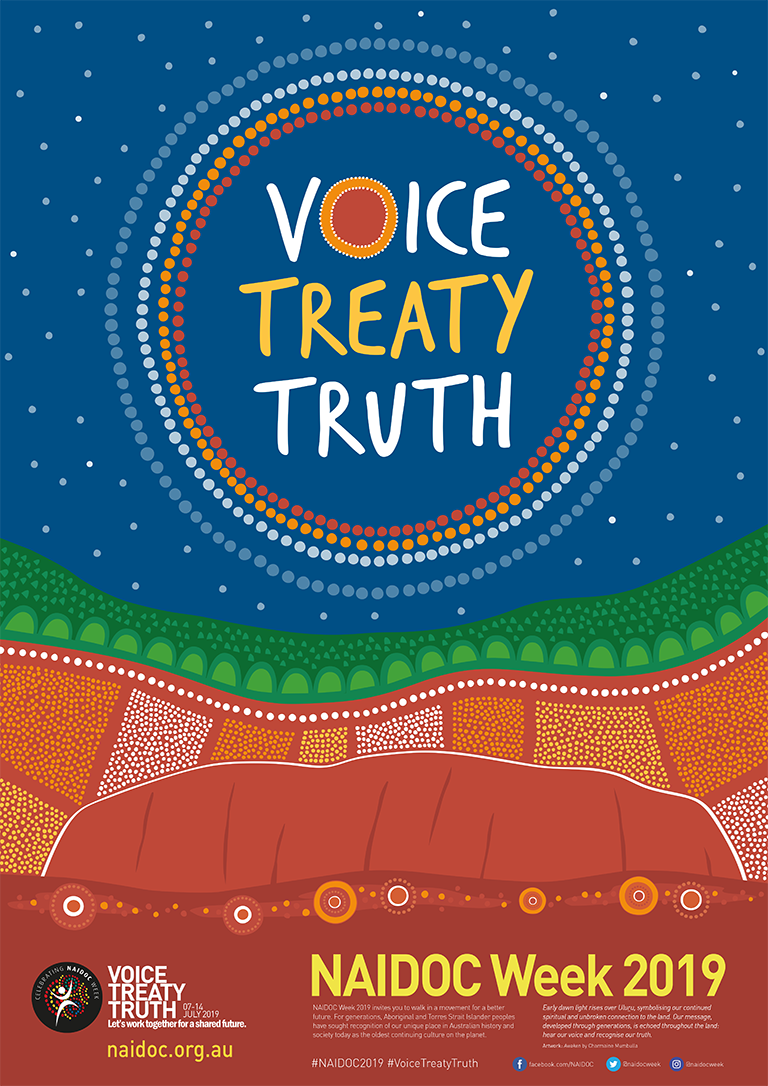 This year NAIDOC week runs from Sunday 7 July to Sunday 14 July and the national theme for 2019 is Voice. Treaty. Truth. Let’s work together for a shared future.

What does NAIDOC stand for?

NAIDOC stands for ‘National Aborigines and Islanders Day Observance Committee’. But pretty much everybody uses the acronym.

How did it all start?

Celebrations of Australia’s colonisation by the British 250 years ago on Australia Day have been boycotted by Aboriginal rights groups since the beginning of last century.

Indigenous Australians have wanted the true history of massacres, dispossession and struggles recognised by all Australians.

Called the Day of Mourning, it was held on the Sunday before Australia day from 1940 to 1955. Across Australia, it was known as Aborigines Day.

After that, the date shifted to the first Sunday of July and the day became a celebration of Aboriginal culture as well as a day of protest.

In 1975 NAIDOC events and celebration became a week-long event.

“NAIDOC is a week borne from a day of protest, a movement towards justice, equality, and freedom and human rights. It’s a week that celebrates and acknowledges our past, our present and looks with hope towards the future.”

NAIDOC week is for all Australians

Check out the official NAIDOC event page here: naidoc.org.au/get-involved/naidoc-week-events. You can even search events by postcode, so it’s easy to find an event in your area.

“Every NAIDOC Week I’d like to see people engage with and deepen their knowledge of Indigenous Australia and proudly celebrate that they are the world’s oldest continuous living culture,” says Janke.

“I want people to use NAIDOC Week to not only learn more about Aboriginal and Torres Strait Islander history, but to also acknowledge and address past injustices.

“Its Our History, Our Country’s History”

“All Australians should celebrate and acknowledge that this country’s First Nations people were our first farmers, bakers, navigators, philosophers, astronomers, engineers, artists, and explorers.

“(They should also acknowledge) that we had a history of achievement of 65,000 plus years of survival, of adaptation, of research and development, that spanned the rise and fall of every other great civilisation on the planet.”

“This year’s NAIDOC theme builds on generations of consultation and discussions among Indigenous people on a range of issues and grievances.

“NAIDOC Week hopes to highlights that Australia is one of the few liberal democracies around the world which still does not have a treaty or treaties or some other kind of formal acknowledgement or arrangement with its Indigenous minorities. The true story of colonisation must be told, must be heard, must be acknowledged.”

The national NAIDOC awards are presented every year to people who are creating outstanding change and demonstrating excellence in their chosen field.