What is a protected area?

A protected area is a clearly defined geographical space, recognised, dedicated and managed, through legal or other effective means, to achieve the long term conservation of nature with associated ecosystem services and cultural values.

Protected areas – national parks, wilderness areas, community conserved areas, nature reserves and so on – are a mainstay of biodiversity conservation, while also contributing to people’s livelihoods, particularly at the local level. Protected areas are at the core of efforts towards conserving nature and the services it provides us – food, clean water supply, medicines and protection from the impacts of natural disasters. Their role in helping mitigate and adapt to climate change is also increasingly recognized; it has been estimated that the global network of protected areas stores at least 15% of terrestrial carbon. 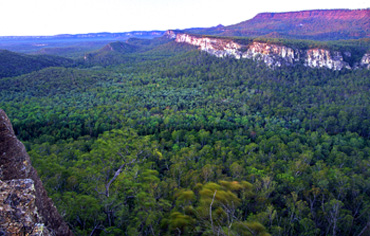 We welcome and support the Queensland Government’s commitment to building ‘a world-leading protected area system for Queensland.

Fulfilling this ambition will require a substantial shift in policy direction. Queensland has the lowest proportion of land in protected areas (around 8 per cent) of any state or territory in Australia. Well short of the international target of 17 per cent.

In recent years, expansion of our protected area system has been minimal, management is chronically underfunded and existing protected areas are threatened by inappropriate commercial development.

At the same time, Queensland has also pioneered a new model of a national park, based around Australian First Nations Peoples owned land and joint management between Traditional Owners and the Queensland Parks and Wildlife Service. This model has converted existing national parks and added new ones and other protected areas across Cape York and has the potential to be adapted and used elsewhere in Queensland.
We seek your support for the following policy reforms and public investment to address these issues:

Growing and improving the management of our national parks network by

Funding our protected areas by

Implementing these practical recommendations presents a unique opportunity for the Palaszczuk Government to deliver on its commitment to creating a world-leading protected area system.